Carol Dweck: A Summary of Growth and Fixed Mindsets 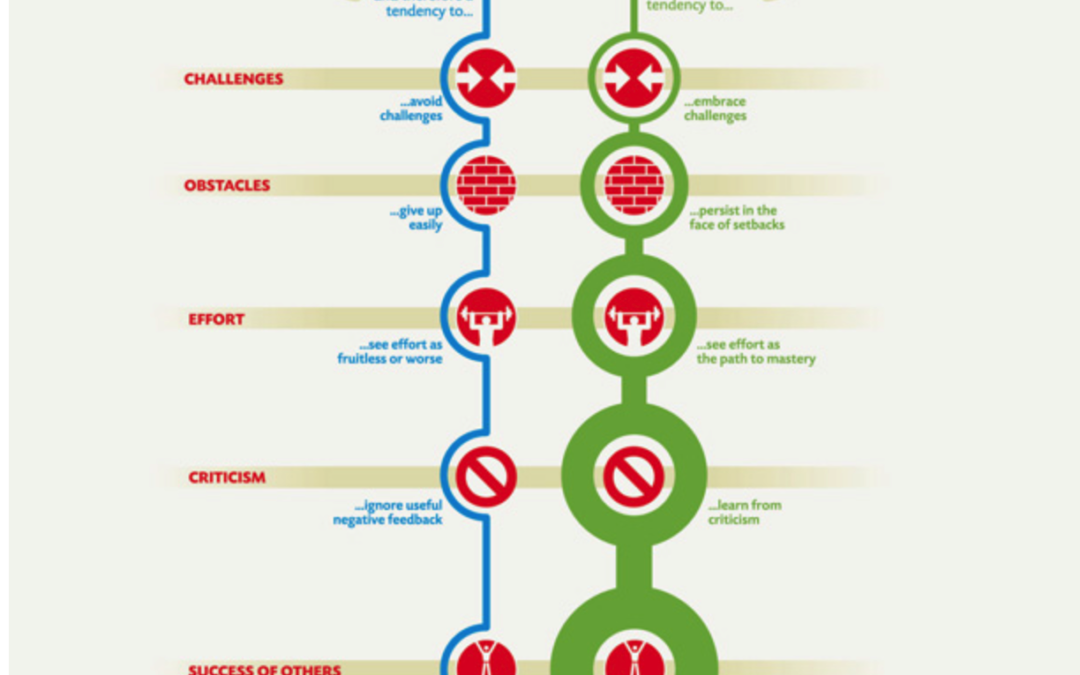 Carol Dweck: A Summary of Growth and Fixed Mindsets

There are two main mindsets we can navigate life with: growth and fixed. Having a growth mindset is essential for success. In this post, we explore how to develop the right mindset for improving your intelligence.

Carol Dweck studies human motivation. She spends her days diving into why people succeed (or don’t) and what’s within our control to foster success. Her theory of the two mindsets and the difference they make in outcomes is incredibly powerful.

As she describes it: “My work bridges developmental psychology, social psychology, and personality psychology, and examines the self-conceptions (or mindsets) people use to structure the self and guide their behavior. My research looks at the origins of these mindsets, their role in motivation and self-regulation, and their impact on achievement and interpersonal processes.”

Her inquiry into our beliefs is synthesized in Mindset: The New Psychology of Success. The book takes us on a journey into how our conscious and unconscious thoughts affect us and how something as simple as wording can have a powerful impact on our ability to improve.

Dweck’s work shows the power of our most basic beliefs. Whether conscious or subconscious, they strongly “affect what we want and whether we succeed in getting it.” Much of what we think we understand of our personality comes from our “mindset.” This both propels us and prevents us from fulfilling our potential.

In Mindset: The New Psychology of Success, Dweck writes:

What are the consequences of thinking that your intelligence or personality is something you can develop, as opposed to something that is a fixed, deep-seated trait?

Your view of yourself can determine everything. If you believe that your qualities are unchangeable — the fixed mindset — you will want to prove yourself correct over and over rather than learning from your mistakes.

If you have only a certain amount of intelligence, a certain personality, and a certain moral character— well, then you’d better prove that you have a healthy dose of them. It simply wouldn’t do to look or feel deficient in these most basic characteristics.

I’ve seen so many people with this one consuming goal of proving themselves— in the classroom, in their careers, and in their relationships. Every situation calls for a confirmation of their intelligence, personality, or character. Every situation is evaluated: Will I succeed or fail? Will I look smart or dumb? Will I be accepted or rejected? Will I feel like a winner or a loser?

These things are culturally desirable. We value intelligence, personality, and character. It’s normal to want this. But …

There’s another mindset in which these traits are not simply a hand you’re dealt and have to live with, always trying to convince yourself and others that you have a royal flush when you’re secretly worried it’s a pair of tens. In this mindset, the hand you’re dealt is just the starting point for development. This growth mindset is based on the belief that your basic qualities are things you can cultivate through your efforts.

Changing our beliefs can have a powerful impact. The growth mindset creates a powerful passion for learning. “Why waste time proving over and over how great you are,” Dweck writes, “when you could be getting better?”

Why hide deficiencies instead of overcoming them? Why look for friends or partners who will just shore up your self-esteem instead of ones who will also challenge you to grow? And why seek out the tried and true, instead of experiences that will stretch you? The passion for stretching yourself and sticking to it, even (or especially) when it’s not going well, is the hallmark of the growth mindset. This is the mindset that allows people to thrive during some of the most challenging times in their lives.

Putting it into Practice

Our ideas about risk and effort come from our mindset. Some people realize the value of challenging themselves, they want to put in the effort to learn and grow, a great example of this is The Buffett Formula. Others, however, would rather avoid the effort feeling like it doesn’t matter.

We often see books with titles like The Ten Secrets of the World’s Most Successful People crowding the shelves of bookstores, and these books may give many useful tips. But they’re usually a list of unconnected pointers, like “Take more risks !” or “Believe in yourself!” While you’re left admiring people who can do that, it’s never clear how these things fit together or how you could ever become that way. So you’re inspired for a few days, but basically, the world’s most successful people still have their secrets.

Sure, people with the fixed mindset have read the books that say: Success is about being your best self, not about being better than others; failure is an opportunity, not a condemnation; effort is the key to success. But they can’t put this into practice because their basic mindset— their belief in fixed traits— is telling them something entirely different: that success is about being more gifted than others, that failure does measure you, and that effort is for those who can’t make it on talent.

From Setback to Success

The other thing exceptional people seem to have is a special talent for converting life’s setbacks into future successes. Creativity researchers concur. In a poll of 143 creativity researchers, there was wide agreement about the number one ingredient in creative achievement. And it was exactly the kind of perseverance and resilience produced by the growth mindset.

In fact Dweck takes this stoic approach, writing: “in the growth mindset, failure can be a painful experience. But it doesn’t define you. It’s a problem to be faced, dealt with, and learned from.”

We can still learn from our mistakes. The legendary basketball coach John Wooden says that you’re not a failure until you start to assign blame. That’s when you stop learning from your mistakes – you deny them.

The Power of … Yet

In this TED talk, Dweck describes “two ways to think about a problem that’s slightly too hard for you to solve.” Operating in this space — just outside of your comfort zone — is the key to improving your performance. It’s also the critical element to deliberate practice. People approach these problems with the two mindsets… “Are you not smart enough to solve it …. or have you just not solved it yet.” 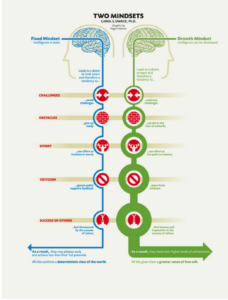 Speaking to the cultural pressure to raise our kids for now instead of not yet, in the TED talk Dweck says:

I heard about a high school in Chicago where students had to pass a certain number of courses to graduate, and if they didn’t pass a course, they got the grade “Not Yet.” And I thought that was fantastic, because if you get a failing grade, you think, I’m nothing, I’m nowhere. But if you get the grade “Not Yet” you understand that you’re on a learning curve. It gives you a path into the future.

“Not Yet” also gave me insight into a critical event early in my career, a real turning point. I wanted to see how children coped with challenge and difficulty, so I gave 10-year-olds problems that were slightly too hard for them. Some of them reacted in a shockingly positive way. They said things like, “I love a challenge,” or, “You know, I was hoping this would be informative.” They understood that their abilities could be developed. They had what I call a growth mindset. But other students felt it was tragic, catastrophic. From their more fixed mindset perspective, their intelligence had been up for judgment and they failed. Instead of luxuriating in the power of yet, they were gripped in the tyranny of now.

So what do they do next? I’ll tell you what they do next. In one study, they told us they would probably cheat the next time instead of studying more if they failed a test. In another study, after a failure, they looked for someone who did worse than they did so they could feel really good about themselves. And in study after study, they have run from difficulty. Scientists measured the electrical activity from the brain as students confronted an error. On the left, you see the fixed mindset students. There’s hardly any activity. They run from the error. They don’t engage with it. But on the right, you have the students with the growth mindset, the idea that abilities can be developed. They engage deeply. Their brain is on fire with yet. They engage deeply. They process the error. They learn from it and they correct it.

It’s easy to fall into the trap of now. Our kids become obsessed with getting A’s – they dream of the next test to prove themselves instead of dreaming big like Elon Musk. A by-product of this is that we’re making them dependent on the validation that we’re giving them — the gamification of children.

What can we do about this? Don’t praise intelligence or talent, praise the work ethic.

… [W]e can praise wisely, not praising intelligence or talent. That has failed. Don’t do that anymore. But praising the process that kids engage in: their effort, their strategies, their focus, their perseverance, their improvement. This process praise creates kids who are hardy and resilient.

How we word things affects confidence, the words ‘yet’ or ‘not yet,’ “give kids greater confidence, give them a path into the future that creates greater persistence.” We can change mindsets.

In one study, we taught them that every time they push out of their comfort zone to learn something new and difficult, the neurons in their brain can form new, stronger connections, and over time they can get smarter. … students who were not taught this growth mindset continued to show declining grades over this difficult school transition, but those who were taught this lesson showed a sharp rebound in their grades. We have shown this now, this kind of improvement, with thousands and thousands of kids, especially struggling students.

Mindset: The New Psychology of Success is a must-read for anyone looking to explore our mindset and how we can influence it to be a little better. Carol Dweck’s work is simply outstanding.

For the original article please go to this link.