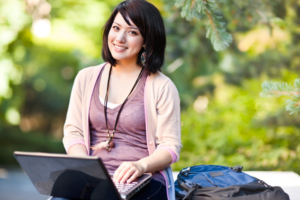 A~~ from Arnold, MD – Money was the major consideration for this student…

…who wants to go to graduate school. We looked at finding schools with strong grants and scholarships to keep the costs low.

She received offers for over $100K in merit scholarship from a private college and several Maryland state schools. She was accepted to all the schools that she applied to and ultimately chose one that I had suggested to her because it was an excellent fit for both her career goals and her limited funds of $15K per year.

M~~ from Toronto, Canada – Worried about his chances of being accepted…

…to an American college, since none of his friends or high school acquaintances had been accepted the previous year. We worked feverishly to find colleges that he would love. Because he was not a strong test taker, most of these were reach schools.

He went early decision to his first choice college – Wake Forest – and received an acceptance letter two weeks after we sent in his application (in September of his senior year). We worked in person, collaborated using email and phone calls, and did his mock interview via Skype. He loves the college and is thriving.

A~~ from Arnold, MD – He was interested in attending an Ivy League school…

E~~ from Annapolis, MD – Wanted a school where she could major in Geology…

…take equestrian courses and bring her horse to the university. We selected colleges that fit the mandate, and she was accepted into all the schools that she applied to with merit money from many colleges.

She chose the Ohio State Honors program and is receiving $40K in merit aid. Being in the Honors Program will also allow her to spend a year in Iceland studying its Geology, which thrills her.

M~~ from Arnold, MD – A student who didn’t love academics…

…hated testing and was unmotivated to leave home and go to college. Got her interested in the Congressional Award program and found her an unpaid internship in teaching.

She got into all eight schools that she applied to, received a total $152K in scholarshipsfrom three different schools, and is thriving at St Mary’s College of Maryland.

P~~ from Annapolis, MD – Having done nothing before senior year…

…this student wanted one of the best psychiatric nursing programs in a HBCU (Historically Black Colleges and Universities).

We started working together at the beginning of senior year and even found free tutoring that helped her to prepare for taking the standardized tests. She was accepted to every school that she applied to, and received scholarships that she can take anywhere.

I~~ From Vienna, VA – wanted a prestigious college at a low cost….

…he had only lived in the United States for a few years, so The College of William & Mary in Williamsburg, Virginia was a great fit for him.

He applied Early Decision, wrote about his international experiences, and got in right away.

No matter where you are on your path to college acceptance, we can help add your story to our growing list of successful outcomes. Take the first step to a brighter future and request a free meetingwith me today.

My student’s reach school was Case Western Reserve. In February while on a blog site about the CWR and saw posts from students who had just been rejected. She was shocked, they had her GPA of 4.6 and SAT’s of 2000. Immediately she logged on to Case Western’s site to see her fate. The school accepted her with $60,000 in merit aid. Having an expert makes a difference!

You have Successfully Subscribed!